My Writing Shed is a Horse Trailer

The past months have seen many changes. Some good... some not... some... just pure awful.

After 36 years the greatest failure in life has resulted in divorce. I am not one of those who found reason to celebrate. I am sad for those who do. Something is very wrong, I think, when a person's perceptions are so broken that they celebrate such a soul tearing personal failure.

But it is what it is. Life is not over. It only bears another deep and searing scar... and you go on.

My home of the past six years or so was a fifth wheel trailer. Going forward... my home is A Lakota LQ (Living Quarters) 3 Horse trailer.

With but 170 square feet or so in the front/LQ part it's not spacious... but it fits me fine. 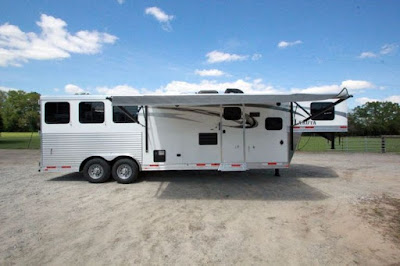 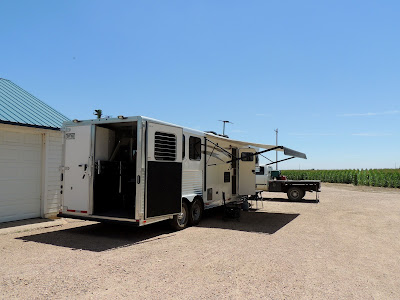 The Horse compartment, once they are unloaded and swept out... becomes my "Writing Shed"... 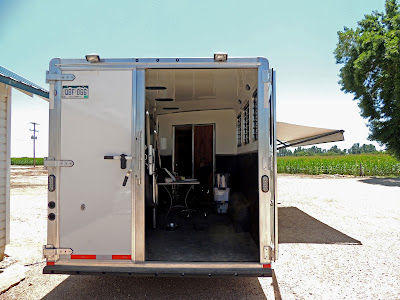 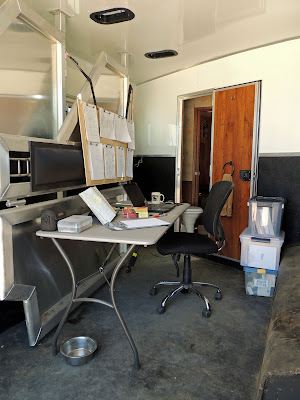 There's an old saying in the Cowboy world; "I never sold my saddle"...

My return To Horse is supported by the fact that in deed "I never sold my saddle"...

I've made progress in that return to the life I never should have left... but it's temporarily blocked by economic reality. The cost of rebuilding and re-equipping has slowed the journey.

... but I'll be returning to Sidney Montana for the beet harvest in October again this year.

That is in the interest of collecting the dinero to continue my return "To Horse".

Back to my "writing shed"... How appropriate is that? I write, so far, westerns. Now... I write westerns with my Writing Shed sitting in a horse trailer.

That, in light of my recent personal failures is moving along in fits and spurts. Some days I can write... many... my mind is occupied elsewhere and the only words that come aren't proper to share, and damn sure aren't part of a Good story.

The next in the Jeb Taylor series, tentatively titled "The Blood Runs true" is finally nearing completion. Though I'd planned on it being published in the spring, as always, life managed to rise up and get in the way.

After many diversions and obstructions I am back to work on it, and hope to complete it this month__and hopefully (fingers crossed on both hands while looking skyward) I can publish it in September... if not... October?

I have become superstitious in the extreme about stating a hoped for publishing date... I expect to have The Fates descend on my this time as well! ;)

Before I go I thought I'd let you know I recently did an interview on an Online "Radio" show called The Wild West Showdown. If it tickles your fancy you can check that out and give a listen.