Ben is a Montana Cowboy in the early 21st century. Though he often feels like he was born out of season, he's left with little option but to put one foot in front of the other and deal with what comes.

The opening book of the series starts with what I would characterize as primarily an Action Adventure, though it does have bits of romance and mystery for sure. The follow on story that will be coming in the next couple of months (as of early May 2013!) is entering into a full on Murder Mystery with that action adventure and bit of romance thrown in to sweeten the mix.

Read about the conflicts that can arise between what can best be described as; a walking talking anachronism of a man working hard to fit into the modern world... and that modern world he struggles so hard to survive in.

This is becoming, in my prejudiced opinion, my best work. I hope you come to agree.

Many Thanks for giving it a try.

This Book, the series Starter, is priced FREE at these retailers; 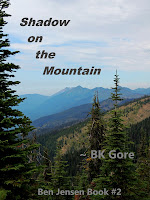 Book #2 of the Ben Jensen series;
~ Shadow on the Mountain ~